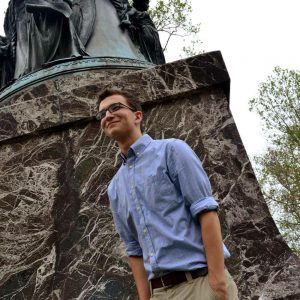 We are pleased to announce our second Peabody Alumnus of the Month, Sam Rimm-Kaufman. Sam attends Yale University after graduating from Peabody and Charlottesville High School, where he stood out among his peers both academically and socially. Sam embodies our mission and exemplifies the ways in which Peabody prepares students to be life-long learners. At Peabody, Sam fell in love with learning. He approached the curriculum with curiosity and wonder, and had the courage to take intellectual risks.

As a result of the thorough education he received from our Middle School team, Sam was able to transition smoothly into highly advanced courses in high school math and science. In his sophomore year, he was chosen for Northrup Grumman’s prestigious HIP (“High School Involvement Partnership”) program. Only two or three students are chosen from all of our local city and county high schools, and his selection is particularly remarkable given that he was only in his second year of high school. Through the HIP program, Sam works one-on-one with engineers at Northrup Grumman, and last year he collaborated with a small group of fellow students to complete an engineering project. (Sam’s group produced an ornithopter, an aircraft that flies by flapping wings.) At the end of the year, Sam’s group presented their final product to an audience that included Northrup executives, community members, and HIP alumni.

Sam has also exhibited tremendous leadership and initiative at Charlottesville High School. He is involved in the student led after school science club, BACON (“Best All-Around Club of Nerds”), and he runs a subgroup of this club called DERP (Dangerous Extracurricular Research Projects). He is a member of the debate team, which will be going to this year’s state competition. Finally, he has taken on the role of Ritual and Practice Vice President for the youth group at his synagogue.

Peabody teachers remember Sam well. Tolly Merrick remembers teaching an all-boys eighth grade government class where Sam “added a grounding, balancing energy to the class. I remember Sam as hard working, open minded, and possessing a great sense of humor.” Marie Beaurline remembers Sam as stepping up to the plate academically and socially as soon as he arrived at Peabody. “Sam is a great thinker and a nice guy too!”

We reached out to Sam and asked him a few questions about his experience at Peabody and his plans for the future. His top choice for college is to attend Carnegie Mellon University and study engineering. However, he isn’t rushing into it. “After my senior year, I plan on applying for an internship at Northrup Grumman Sperry Marine, a military contractor that designs GPS navigation systems. If all goes well, I’ll spend a gap year before college as an intern, learning more about what makes a good engineer.” His fantasy job would be in engineering where he can work to solve social and environmental problems. “I hope that the work I do is used to make the world a better place or improve someone’s life. After retiring, I picture myself volunteering as a high school chemistry teacher so that I can give back to the community.”

As for his experience at Peabody, Sam feels that we prepared him incredibly well for high school from an academic standpoint. “Peabody put me a few years ahead in math, science, and Spanish,” which allowed him to dive into elective courses sooner than his peers. Furthermore, “the advanced math offered by Peabody funneled me into math that really provided a challenge and led to a love for math beyond what I had attained previously. Peabody fostered a love for science that led me to take more science courses than required.”

Sam honors the Peabody community with his success, initiative, creativity, and resiliency, and we are so pleased to honor him as our Alumnus of the Month. Congratulations, Sam! We are all so proud of you, and cannot wait to see where you go from here!

Spanish
Mary Katherine Prehn has a B.A. in English Literature with a minor in Spanish from Sewanee: The University of the South.  After studying Art History and Medieval Spain and the Road to Santiago in Madrid, she hiked El Camino de Santiago in 2016. Most recently she has returned from living in Spain full-time and working at two schools outside Ourense, Galicia.  She also has participated in the Advanced Spanish program at the Universitat Pompeu Fabra in Barcelona and did outreach in Quito, Ecuador as part of the Youth World program. Senora Prehn is not only passionate about language learning but also youth development programs, and she has served with nonprofits both locally and abroad. She is excited to develop a cross-cultural curriculum for Spanish language learners, incorporating artistic and literary elements, with her students.

Jeannette Ortega received a B.S. in Business and Accounting from the University of Phoenix. She has worked for small businesses as well as larger corporations for nearly 20 years, and has both accounting and operational experience. Ms. Ortega moved to the mountains of Virginia with her daughters in 2018. In her spare time she enjoys gardening, country living, dancing, and visiting the lake with her family.

Heather Miller received a B.A. from Dartmouth College in history and an M.A. in Curriculum and Teaching from Columbia University Teachers College.  She has taught several different age groups but has a particular passion for math and for students in the upper elementary grades.  Heather has taught at private schools in Connecticut, Ontario, Manhattan, Charlotte and, most recently, Barcelona.  She has served as both a homeroom teacher and as a learning support specialist.  When not teaching, Heather spends time with her children, who are young adults, and she enjoys hiking, reading, yoga and relaxing with her two cats.

Hope Sikora received a B.A. in Mathematics and a MAT in Secondary Education from the University of Virginia. Ms. Sikora loves math because it encourages problem solving and helps us understand the world. In her free time, Ms. Sikora enjoys cooking, exercising, and cheering on the Hoos!

Emmie Wright holds a B.A. in Spanish with a minor in Anthropology from Washington and Lee University. She earned her M.A in Spanish from the Middlebury Language School, finishing her last summer in Guadalajara, Mexico. She has spent a number of years teaching both middle and upper school Spanish in Charleston, SC, New York City, and Charlottesville. She took time off from teaching to stay home with her two children, both of whom attend Peabody. In her free time, she loves to travel with her family (especially to Menorca, a small island off the coast of Spain), garden, read, and run.

Sarah FitzHenry holds a Masters in Library Information Science from the University of Pittsburgh, as well as a B.A. in English and a Bachelor of Music in Music Education, both from Bowling Green State University. Ms. FitzHenry brings experience from both public and independent schools, having taught a diverse range of subjects from elementary literacy to computer science. Additionally, she is an experienced educator coach and presenter, and is passionate about helping teachers and families shape the next generation of leaders and citizens. Ms. FitzHenry lives in Charlottesville with her family, and is pretty much always reading a book or asking someone a question.

Tara Montgomery holds a BSN from the University of Virginia.  Her experience includes nursing in the inpatient setting (Sentara Martha Jefferson Hospital), outpatient clinic (UVA Cancer Center), and most recently, Telehealth nursing. Ms. Montgomery’s goal as Peabody’s school nurse is to provide a safe environment for students to learn and play as well as to promote health and wellness in exciting and proactive ways.

PreKindergarten Assistant
Ella Chin graduated from Peabody in 2013, holds an Associate of Science in Education and an Associate of Arts in Liberal Arts, and is a fourth-year Spanish major at the University of Virginia. Her studies in language and culturally sustaining pedagogies support her work at Peabody and her passion for education as a social justice movement.  Ms. Chin has maintained a presence in our community throughout her high school and college years while serving as a substitute teacher, tutor, Camp Invention counselor, and Kids Night Out host. With a background in bilingual children’s theater, Bringing Science to PreK, and Mindfulness for Children, she serves as both a nurturing caretaker and an inspiring teacher, and she is excited to be a part of the Peabody PreK magic.

Teaching Assistant
A Peabody alumna (‘11), Lydia Funk graduated from The College of William & Mary with a B.A. in French and Francophone Studies and a minor in Middle Eastern Studies. Committed to cross-cultural communication, she studied in both Montpellier, France, and Brussels, Belgium while in school. After graduating, she served as a group leader on an exchange program for Iraqi undergraduates in Detroit. She recently returned from a year teaching English in a French high school. In her free time, Ms. Funk enjoys reading, gardening, restoring antique furniture, and planning her next travel adventure.

Teaching Assistant
Ayesha Ahmad holds a master’s degree in English from the University of Edinburgh, Scotland and a master’s degree in journalism from the University of Maryland, College Park. Before working as a reporter for a local newspaper in Maryland, she taught elementary school for two years in Raleigh, NC.; she has owned her current wedding and portrait photography business for the past 11 years. She moved to Charlottesville with her family in the summer of 2019, and the younger of her two sons attends Peabody. In her free time, she reads books excessively, but she also enjoys baking, hiking, and handwork.

Outdoor Educator
Geneva Mommsen received her B.A. in Zoology from Miami University of Ohio and holds many certifications for environmental education programs, including Project WILD and National Geographic Educators.  Her professional experience in Environmental and Outdoor Education began with multiple positions at Cincinnati Zoo and Botanical Garden in the Education Department, leading summer and overnight programming. Most recently Ms. Mommsen served as the Education and Volunteer Coordinator for the National Marine Life Center in Massachusetts. When not helping students make discoveries in nature, you can find her hiking or kayaking, baking something with lots of cinnamon, or brushing up on ballroom dance skills.