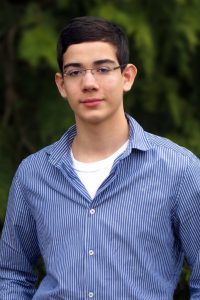 We are pleased to announce Andreas Ravichandran as our Peabody Alumnus of the Month. Andreas attended Peabody Elementary and Middle School, and is now a senior at Albemarle High School, where he succeeds in a rigorous academic curriculum. During his time at Peabody, Andreas strengthened his love of learning and his confidence in facing intellectual challenges. These skills have aided him greatly during his current academic and social pursuits.

Andreas felt well prepared by our Middle School team for his high school transition. He skipped his eighth grade year and still felt beyond ready for the rigor for his advanced courses. He attributes his strong work ethic and organizational skills to the culture of learning at Peabody.

During his years at Albemarle High School, Andreas has been able to engage in several academic pursuits that have increased his passion for math. In addition to taking math classes at the University of Virginia, he has led his school’s math team to their current standing of being ranked first in the state. He is the president of the Math Honor Society- a school wide organization that helps tutor students and spread awareness for Pi Day. He is also a programmer for his school’s FTC robotics team, which will be competing at the East Coast super regional tournament.

Andreas founded and, for the past two years, directed the Junior Albemarle Math Competition (JAMaC), an event that is open for local middle school students in both public and private schools. He was proud to note that Peabody has competed and performed well at the JAMaC both of those years. He has also had the opportunity to spend the past two summers at Boston University at the PROMYS Math Program, an intensive six week course where he specialized in number theory, and researched trigonometric polynomials, abstract algebra, and non-Euclidean geometry.

In addition to his passion for math, Andreas has a great love for music, current cultural events, and family. He has been playing the piano for twelve years and the saxophone for eight years. To further his musical talents, he currently takes higher level piano classes at the University of Virginia and plays saxophone in Albemarle High School’s jazz band and saxophone ensemble. He enjoys engaging in spirited discussions about sports, arts, and other entertainments; these interests led to him to become the vice-captain of his school’s varsity Quiz Bowl team. The AHS varsity Quiz Bowl team has won the state championship the past two years. Despite all of his activities, Andreas still finds time to be a great older brother to Katharina, who is currently in the fifth grade at Peabody School.

Andreas has enjoyed all of his academic and extra-curricular pursuits. He explains that involving himself in his school’s teams and clubs was a way to easily find the familiar small-community feeling that he remembered from Peabody.  His Peabody teachers fondly remember Andreas to be a driven student, willing to work hard, and passionate about learning. Marie Beaurline recalls, “Andreas always cared about learning and was willing to work as hard as necessary to succeed. Andreas got along great with all of his classmates.” Demi Runkle states that Andreas “always wanted to know the ‘why’ behind concepts.” Madame Meyer remembers that Andreas was “very engaged, curious, and the epitome of a model student.”

Andreas has been accepted to the University of Virginia, Columbia University, and the University of Chicago, but is still waiting to make the final decision of where to attend college. He wants to pursue his love for mathematics by studying applied math, specifically in computer modeling which could be used to better analyze chemical systems. He has worked before on using computer models to mathematically predict how much of the seasonal flu can be prevented in Charlottesville through various means, and would enjoy continuing in this type of research. He further hopes to obtain his Ph.D. in applied math and modeling, where he can then pursue research in an academic setting.

Congratulations on all of your achievements and endeavors, Andreas! We are proud of you and are very excited to see where you go from here!